In this installment of the Te Tuhi Billboard project Auckland-based artist Fiona Jack extends her ongoing series of works that re-present historical photographs within a contemporary art context. The three images presented in Pakuranga depict various outlooks from Te Tuhi’s immediate surroundings circa 1910. As Jack has done with previous projects, included alongside the billboards is an accompanying text. An edited transcript of a discussion facilitated by the artist presents a discursive response to the images from artists, writers and historians Alan La Roche, Nova Paul, Luke Willis Thompson and Pita Turei.

Scanned from glass plate negatives and then reproduced as billboards, Jack’s latest project encourages us to consider transpositions of material and cultural histories. From a position only a few hundred metres from where the original photographs were taken, the viewer may reflect upon the immeasurable transformation that the Pakuranga and wider Auckland area has undergone since the images were first captured. This is reflected through the combination of technologies used as well. Upon close inspection of the billboards skins the viewer may notice scratches, dust and other markings inherent to glass plate photographic technology intentionally left visible as a reminder of the images’ origins. Within the layers of archival evidence found in the content of imagery and the materiality of the medium, the billboards’ potential as a point of historical contemplation is engaged.

The provided transcript offers reflections on the relationship between the production of the original glass plates, the surrounding social and cultural contexts as well as the significance of all these today. The discussion itself moves from factual points of interest relating to flora, to histories of tangata whenua to more nuanced conversation akin to artistic response. With this, the artist proposes for, not only a deeper understanding of the potentially divergent histories that we may veil over a particular place but also a discursive model for talking about art.

“Well aware of its relevance within an exhibition that opens on pollingâ€“day in the capital, Fiona Jack’s work for Prospect asks us to consider an archival image closely related to the history of women’s suffrage in New Zealand.

Jack invited a small group of Wellington women to gather together and talk about the photograph “Election Day in New Plymouth, 1893”. The conversation that evolved was transcribed and edited by Jack, and these shared thoughts now find themselves represented within a small typeset publication that’s free for visitors to take away.

Jack’s project offers multpiple ways of looking at, and reading into, the archival image that is presented within the galleryâ€“writ large upon the wall. The conversation is an open one, initiated by the fact that when this image was published in the book “Standing in the Sunshine: A history of New Zealand women since they won the vote” (1993) it was posited as possibly the first photo taken of women voting freely in a national election anywhere in the world.

Drawing strength from the participatory framework of this project, Jack points to a specific moment in history as a catalyst for shared consideration. Other collaborative projects like Kohimarama (2008/9), My fellow Citizens (2009) and Living Halls (2010) have also operated within the same fertile space between history, memory and document and have invited Jack’s participants to help fill that space with their own ideas, readings and perspectives. 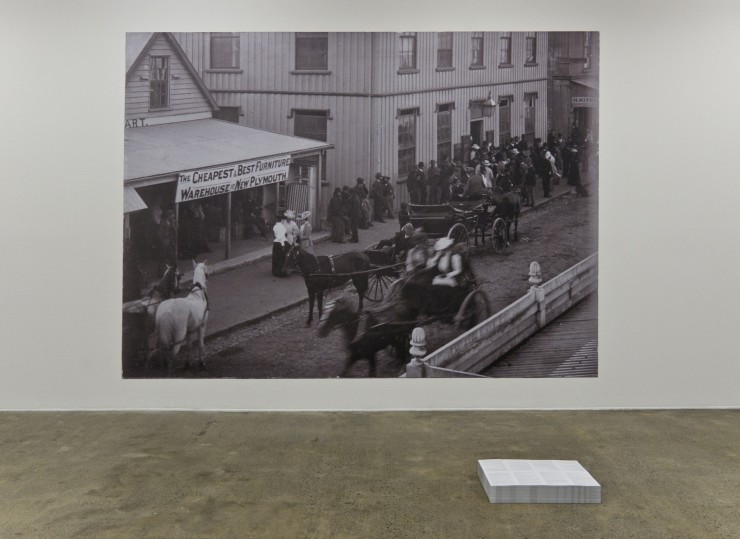 This text is an edited transcript of a conversation held at ARTSPACE on Karangahape Road in Auckland, New Zealand, on the 20th of April 2010. Participants Fiona Amundsen, Cassandra Barnett, Rebecca Hobbs, Fiona Jack, Louise Menzies, Layla Rudneva-Mackay and Robyn Pickens were invited to discuss the photo, Election day in New Plymouth, 1893.