The paintings, drawings, honour boards, documents, databases, books, photos, stories and audio recordings that make up the many facets of this project form a living archive of the War Memorial halls of Aotearoa. Following the Second World War, New Zealanders wholeheartedly embraced the idea of constructing utilitarian memorials to honour soldiers killed in action instead of the traditional monuments favoured after the First World War. Government subsidies encouraged the widespread building of community centres and halls as living memorials for all to share. These were monuments with an inside, conceptually complex spaces that were built by communities to symbolise their grief, but also to solve a practical need for a place to gather. To look further at our research and exhibitions for this project please follow the various links below.

Drawings from the Living Halls exhibition 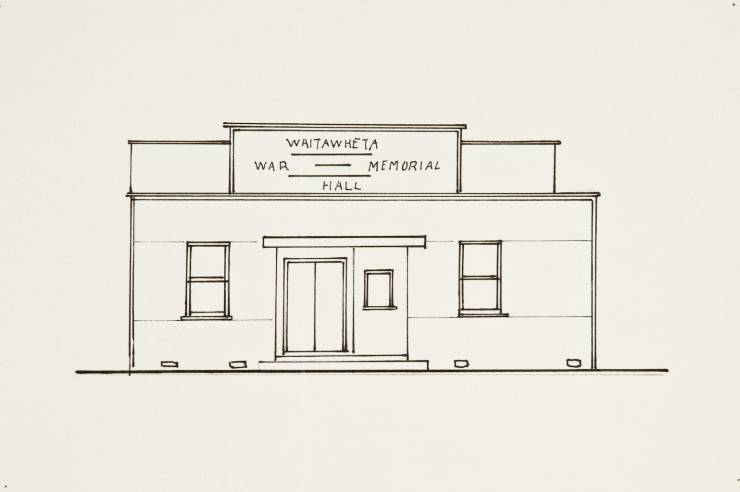 Most of New Zealand’s Memorial Halls were designed and built by local people, for local people. The National Archives in Wellington houses over 700 correspondence files relating to each Memorial subsidy application, and within some of those files there is a drawing that sketches out a vision for the hall. Some are overly ambitious, some are little more than a square drawn on a scrap piece of paper, but almost all the drawings are very close to what was eventually built. These drawings have been faithfully replicated in minute detail, honouring the vision and effort of the people that spent many years toiling away to fund, design, build and maintain their halls.

Excerpt from Rhana Devenport’s Living Halls essay: “The inherent nature of this artwork is informed by an approach not dissimilar to the concept of the living memorial. Jack’s is a ‘living work’; one that is both collaborative and functional in the sense of being an archive for the production of different knowledge systems associated with the halls. It steps away from the notion of singular authorship and any association with ‘dead memorials’.”
“The drawings remain a fundamental and intrinsic element within the project. In the exhibition space, a series of 48 drawings are carefully poised and pinned to a wall. Taking her cue from the visual evidence found in governmental and private archives, Jack, via a conscious re-drawing process, created a new meta-memorial to, in her words, ‘a post World War Two moment of public aspiration, when communities engaged in the visionary process of describing what they wanted to become’.iv The initial drawings of memorial halls could be read as imaginings of the possibility of making spaces to remember. Tracing a path from drawing to architectural form, Jack examined how ideas took shape and became part of a larger body or collective socio-cultural whole that stretched across Aotearoa. Jack is critically engaged in, as she notes; ‘picturing how communities picture themselves’.”

Paintings from the Living Halls exhibition

Today a great many War Memorial Halls are still loved and maintained by their communities. In response to the original impetus for communities to decide for themselves what their hall would look like, Jack invited local painters around the country to depict their neighbourhood Memorial Hall, creating a rich visual archive that reflects the close and active relationships between these buildings and those who use them.

Excerpt from Rhana Devenport’s Living Halls essay: “Elsewhere in the exhibition is a room that houses a series of fifty paintings of the buildings; each is attributed to its maker. Jack’s invitation to painters across Aotearoa to make ‘portraits’ of their war memorial halls provides a compelling and potent avenue of participation within the Living Halls project. This is a commissioned collection, an orchestrated venture, an archive of others’ cultural production, the invitation was consistent to all painters and all submissions were accepted. Jack’s role as commissioner here is an interesting one in terms of the formation of this new archive which temporally catapults the war memorial hall phenomenon into a shared space of today. She has, with considered thought, eschewed the perhaps obvious pull towards documentary photography as a more objective (and possibly melancholic) archiving element within the project, and prefers instead to allocate this series (accumulated via her own camera and from various contributing photographers) to the digital and printed database component. The paintings, quite simply, bring multiple and subjective (even fictive) perspectives into the wider understanding of the buildings and their role. By engaging in the commissioning process Jack embeds these disparate and personal contemporary experiences into this multi-faceted archive.” 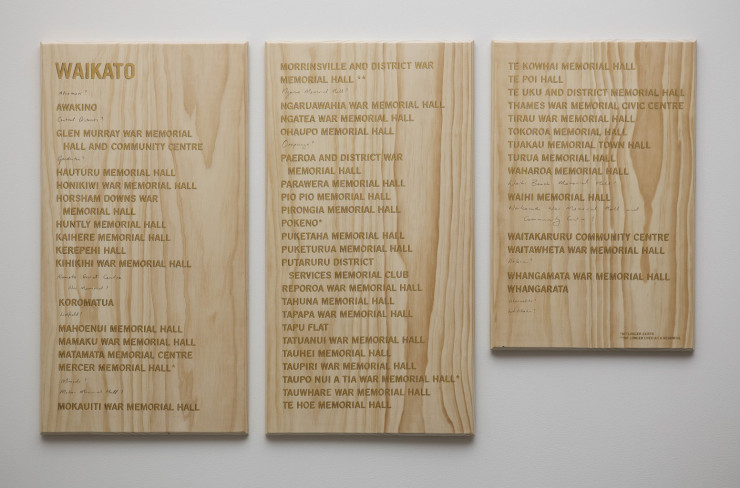