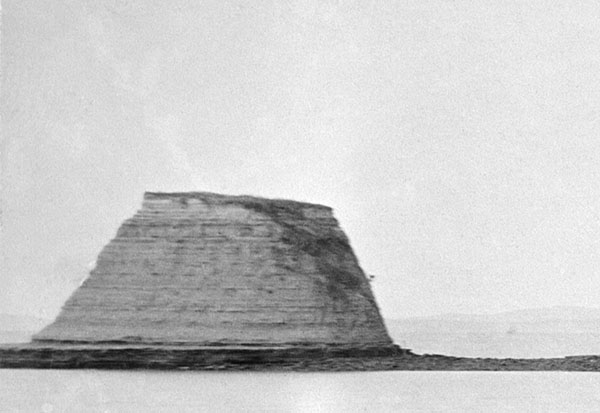 This billboard is a montage of two photos. One was taken in 2008 (Haruhiko Sameshima) and is of the headland most commonly known as Bastion Point, or Takaparawhau. The other, taken in 1901 (James D Richardson), is of “Bastion Rock” or Kohimaramara – the rock off the point that was removed in the early 1900s. The name Kohimaramara literally translated can mean “to collect the remnants”, and reflects that the Maori who lived there and gathered there thought of it as “the peacemaking area” – a place to collect the remnants of conflict and dispute and to make peace. The Tamaki Yacht Club building now sits on this land.

There are things I have not done. Things I have not thought. There are things I could do, things I should do. Why do I not do them? What am I afraid of? I am not afraid, I am lazy, I am embarrassed. I was born here but still what have I done to you? I care for you but I can’t help myself, I can’t stop. I know I will do it to you again. Where is my pride? My pride is misdirected. Can you help me find my way? Can I come to you like the day of old, can we sit together and talk? If you speak to me will I listen now. Can we look out to the yacht club and know it was once an island, an island that I cannot see. I feel loss. I feel lost. What have I done? I don’t remember. How can I find my way when the path I traveled has grown into a city that does not know itself. Kohimaramara lost its Island and I took it made it into a road or was it the causeway? Or maybe it became part of the foundations of the Shortland street Post Office, I just can’t remember. The things I wrote down then make no sense today. I knew nothing then as I know now. I once called you Sugarloaf, I guess that’s because you looked like one. I once thought I knew what your name meant but at no time did I ask you. History is not white, I am, and as I am dependent on the written word for my history I become lost, and I have come to know of a lost island.